A Century of History

In 1906, Archbishop Moeller considered building new seminary facilities near Cincinnati.  When fourteen acres of land in Norwood were gifted to the archdiocese, he decided the archbishop’s residence and the seminary, Mt. St. Mary’s of the West, should be built at that location. 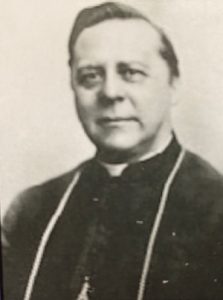 Construction on the archbishop’s house was started around 1909 by renowned Cincinnati architect Samuel Hanniford, also known for designing Music Hall, City Hall, and many homes in the Cincinnati area. 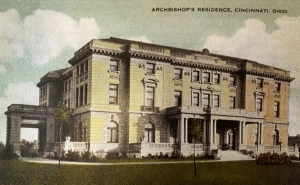 In 1911 Archbishop Moeller hosted the 1st Eucharistic Congress on these grounds. This event publicly proclaimed to the world the importance of the Real Presence of the Eucharist. This emphasis is still felt strongly today at The Center. 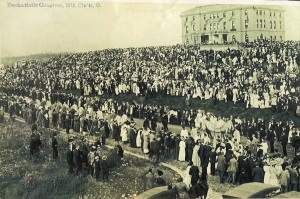 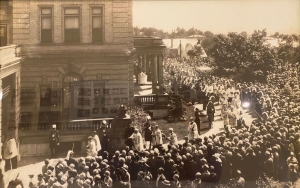 In 1918 construction began on the 180,000 sq. ft. seminary. When this building was constructed, electricity had not yet come to Norwood. Construction took 3-4 times longer to complete, compared to what it would take today. 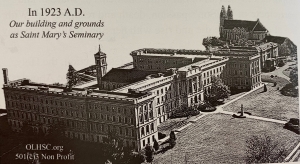 In 1923, 185 seminarians arrived at the newly finished building. Seminarians resided here until 1980 after which they were transferred to what was called St. Gregory’s Seminary in Mt. Washington (which had been the minor seminary for the archdiocese.) When the two seminaries were consolidated, the name of St. Gregory’s was changed to the current Mt. St. Mary’s of the West. This building in Norwood was then abandoned for more than a decade. 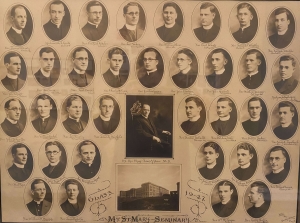 In 1980 the buildings and grounds began to deteriorate and went into incredible disrepair. Pipes froze and broke resulting in ceilings crumbling and falling, floors being destroyed, and rooftops cracking and leaking.

But God wasn’t done with this place yet!

In the early 1990’s, a Cincinnati Diocesan priest, Father Richard Wilhelm, was looking for a property to make a retreat center for his brother priests. Father, a 1943 graduate of the seminary, asked the archdiocese whether he could purchase that same, now unused, seminary. Originally valued in the millions of dollars, through his persistence, the archdiocese reduced the sale price to $100,000. To raise the money needed, Fr. Wilhelm mortgaged several properties and sold an inherited original Wright Brother’s propeller. Several other priests joined Fr. Wilhelm in this endeavor. 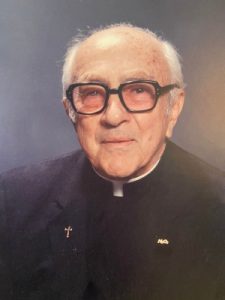 Mary Works Through Her Priests

As Fr. Wilhelm was deciding how to move forward with his “Monk’s Retreat,” Our Mother Mary was working in the hearts of several priests. One of those priests was Fr. Leroy Smith, who had always had a very deep devotion to Our Lady. While he was pastor of St. Joseph Church in Cold Spring, Kentucky, he received correspondence from an alleged visionary, known to us now as the Batavia visionary, indicating that his parish church would be “a place of great devotion…where Our Lady will manifest herself.” On August 31, 1992, the first of 3 public manifestations of Our Lady occurred at midnight at St. Joseph Church. Then in December of 1992 Fr. Smith received another personal message from Our Lady saying, “I have great plans for my House of Mary.” (Our Lady of the Holy Spirit Center)

Father Wilhelm asked Father Leroy Smith to join him in early 1993. The presumed apparitions of Our Lady followed Fr. Smith to OLHSC and thousands of visitors began to arrive on each August 31st for her reported appearances for six years. Hundreds of volunteers wanted to be a part of Our Lady’s plans for “Her House”.  But what Our Lady requested was not just the rebuilding of the property but also the rebuilding of the faith.

Through the leadership of Fr. Wilhelm and Fr. Smith, the former seminary has seen a gradual metamorphosis, slowly regaining its physical and spiritual grandeur.  This “House of Mary,” the Monk’s Retreat, was re-blessed, dedicated to the Immaculate Heart of Mary, and renamed Our Lady of the Holy Spirit Center on May 1, 1993.

A New Future for Our Lady of the Holy Spirit Center

Fr. Leroy Smith was named the first President of Our Lady of the Holy Spirit Center and in 1993, a troop of volunteers, many of whom were from the priests’ former parishes, began refurbishing the building. The damage was extensive, and it was a miracle that the right people came at the right time to meet the needs of The Center. It was through the efforts of these original and subsequent volunteers that the building was able to be restored. 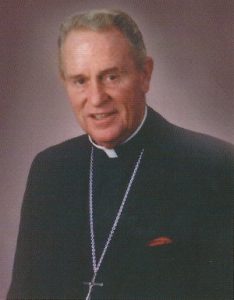 Our Lady’s Presence is Felt

During this time, Fr. Smith accompanied a woman to a farm in Falmouth, KY where she experienced a presumed apparition. Our Lady confirmed the Falmouth Farm site as a holy place in a private message to Father Smith through the Batavia visionary. From 1994 through October 1995 on the 8th of the month “Our Lady of the Most Holy Rosary” appeared to both the Kentucky and Batavia women at the Falmouth Farm. This place is now known as “Our Lady’s Farm” and contains a beautiful chapel, outdoor grotto, cross hill, and outdoor stations of the cross. It is part of Our Lady of the Holy Spirit Center properties along with the Archbishop’s House and the acreage on which The Center sits.

On August 31, 1995, Our Lady, as an answer to prayers, manifested as flashes of beautiful light at midnight at “Her House,” Our Lady of the Holy Spirit Center, in Norwood, Ohio.  According to the thousands of people in attendance over the years, Our Lady’s presence was felt in a spectacular way on the 31st of each year until 1999. She continues to work miracles in the lives of those who visit and are open to the graces flowing from her Immaculate Heart. 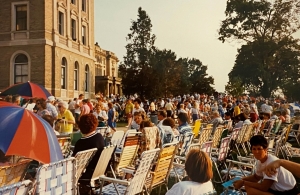 For 63 years young men were prepared for the priesthood, they experienced the grace of the Sacraments, became educated about the faith, and spent time in prayer and reflection growing closer to Our Lord at Mt. St. Mary’s Seminary (Our Lady of the Holy Spirit Center).
When the seminary was abandoned in 1981 for 12 years, Our Lady worked in the hearts of some special men and women. They heeded Her call and began the rebirth of this holy ground. The Holy Spirit Center continues the same mission it began with; to be a house of prayer, offering the Sacraments, educating in the faith, and providing a beautiful place for reflection. Mary didn’t stop with The Center, but she also appointed a holy place in Falmouth, KY., Our Lady’s Farm, to help fulfill this mission.

Our Mother, Mary, is always pointing us to Her Son and at Our Lady of the Holy Spirit Center, Eucharistic Adoration continues around the clock. Many people have walked through these halls, wandered in the gardens, prayed in the chapels, and felt the presence of Our Lord and Our Lady in their lives and been converted. Our hope is that Our Lady of the Holy Spirit Center will always exist and fulfill its mission to bring others closer to God, Our Lady and Our Lord, Jesus Christ. 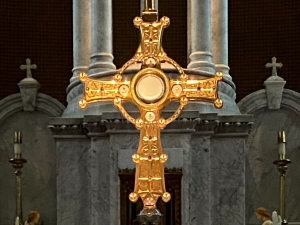 Adoration at Our Lady of the Holy Spirit Center

We use cookies on our website to give you the most relevant experience by remembering your preferences and repeat visits. By clicking “Accept All”, you consent to the use of ALL the cookies. However, you may visit "Cookie Settings" to provide a controlled consent.
Cookie SettingsAccept All
Manage consent

This website uses cookies to improve your experience while you navigate through the website. Out of these, the cookies that are categorized as necessary are stored on your browser as they are essential for the working of basic functionalities of the website. We also use third-party cookies that help us analyze and understand how you use this website. These cookies will be stored in your browser only with your consent. You also have the option to opt-out of these cookies. But opting out of some of these cookies may affect your browsing experience.
Necessary Always Enabled
Necessary cookies are absolutely essential for the website to function properly. This category only includes cookies that ensures basic functionalities and security features of the website. These cookies do not store any personal information.
Non-necessary
Any cookies that may not be particularly necessary for the website to function and is used specifically to collect user personal data via analytics, ads, other embedded contents are termed as non-necessary cookies. It is mandatory to procure user consent prior to running these cookies on your website.
SAVE & ACCEPT